Members of the Rotary Club of St. Augustine and the organization’s sister club, Rotary Club Avilés (Spain) held a simultaneous beach and riverbank clean up on International Coastal Clean-Up Day on Saturday, September 21. Ninety members of EarlyAct, RotarAct and InterAct and their families joined the Rotarians. The transatlantic Rotary Club member project is an international link to commemorate St. Augustine Rotary Club's 100th anniversary year in 2020.
Locally, the beach cleanup took place at Frank B. Butler County Park East, Minnie Street in Butler Beach, Fla. According to Susan Parker, Ph.D., Rotary Club member, event coordinator, and historian, the premise of the event is to recognize Pedro Menéndez, founder of St. Augustine on Sept. 8, 1565, and a native of Avilés, who sailed the Atlantic many times. Ships of his fleet sailed from Avilés to establish La Florida and its first city, St. Augustine. “Avilés is celebrating an anniversary as well with the 500th birthday of Menendez,” said Dr. Parker. “The Atlantic Ocean ties the two cities to each other, and with this joint project, we honor our historic ties and common concerns for the condition of the beaches and oceans,” she said.  Both clubs will be wearing t-shirts about the event provided by Rotary Club of St. Augustine. Dr. Parker is coordinating the event and activities with Sabino Gonzalez, president of the Rotary Club Avilés. The cleaners gathered on the beach for a photo, faced northeast out at the Atlantic and toward Aviles, and waved to the Spanish city. “We are proud to be hosting the beach cleanup in September, and a variety of fun and formal fundraising activities to celebrate our 100th anniversary next year including a reverse raffle in January and the grand gala in May,” said Peggy Gachet, Rotary Club of St. Augustine’s President. In the summer of 2016, Alexius Ferguson, Suzanne Stauble, and Katherine Batenhorst met to discuss a group effort for improving neighborhood camaraderie in St. Augustine and doing good deeds at the same time. Alexius, a former St. Augustine High School (SAHS) teacher, had already started neighborhood clean up activities through his group "Redemption." Suzanne, a teacher at SAHS & faculty sponsor of Interact, and Katherine, a Rotarian and SAHS Alumna, had participated in a Redemption clean-up and wanted to brainstorm about involving the Rotary Club of St. Augustine and the SAHS Interact students. Out of this meeting, the CommUNITY clean-ups were born.

Our Rotarians, SAHS Interact members, Redemption members, as well as St. Johns River State College Rotaract Club members, community volunteers, and local youth sports teams have come out to the event, which organizers are trying to hold three to four times per year. Areas near Osceola Elementary, the Solomon-Calhoun Center, and The Webster School have been the focus thus far. At the most recent CommUNITY Clean-up, held on Earth Day, 2017, the American Legion Post 194 members provided bag lunches and water for all volunteers. It truly is a CommUNITY effort where we Rotarians live our motto, "Service Above Self." 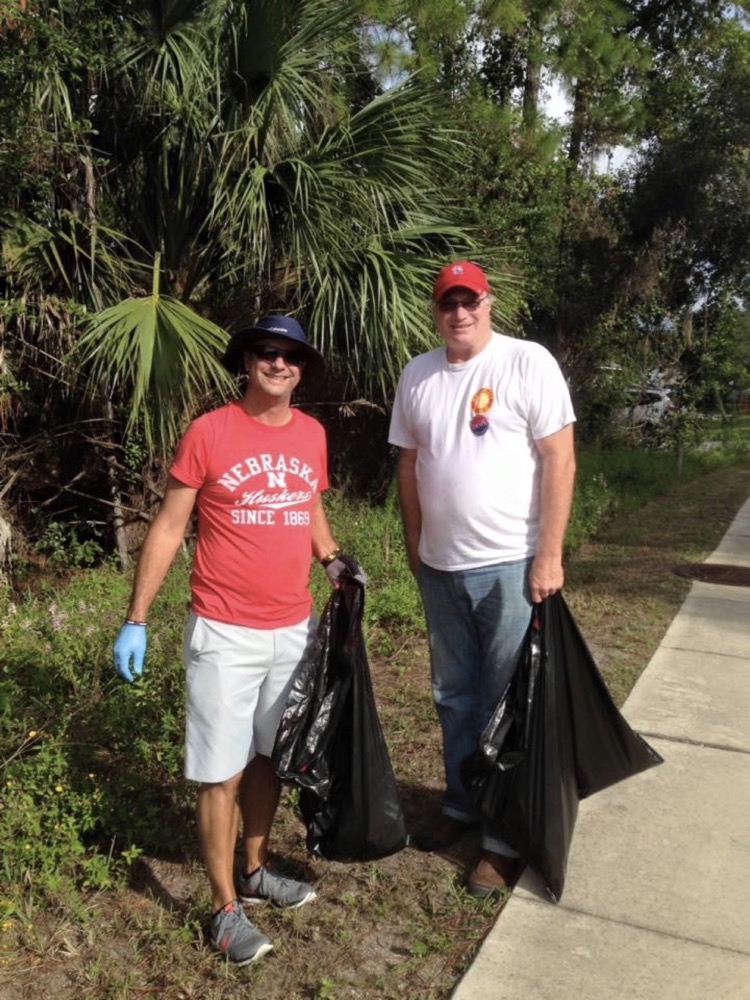 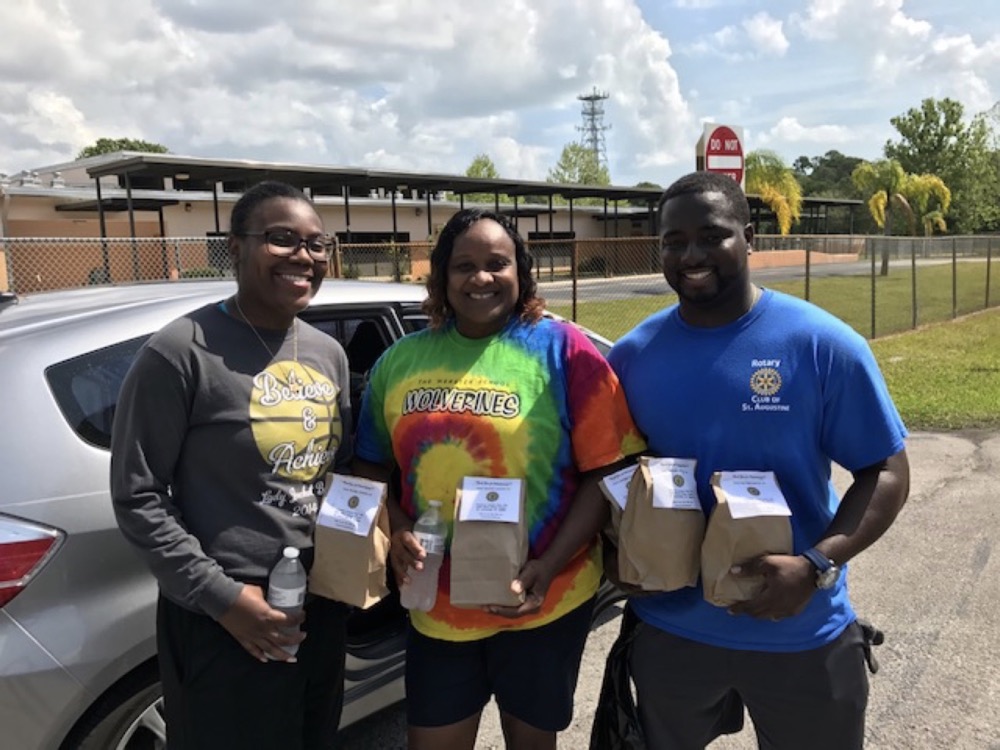 What kinds of places does your mind conjure up when you think of a chain link fence?

Do you imagine your childhood home? A playground or park?

You likely didn't think of an 18th century cemetery in the oldest city in the nation. Well, that is exactly what surrounded the Tolomato Cemetery in St. Augustine until early 2016, when, utilizing many individual donations and a $30,000 gift from The Rotary Club of St. Augustine, the Tolomato Cemetery Preservation Association replaced the chain link enclosure with a beautiful wrought iron fence and a handmade iron gate.

Not only does the cemetery have historical significance, with graves of individuals from Ireland, Cuba, Spain, Africa, Minorca, soldiers from both sides of the Civil War, and Fr. Felix Varela, it is also centrally located on a well-traveled corridor into the downtown area. The aesthetic enhancements to the Tolomato cemetery not only provide a more pleasing entry to St. Augustine's downtown, but also give a nod of honor to those whose final resting place is among centuries-old oaks in a town which our club is extremely proud to call home.

The idea of a Quad Club project began a few years ago when several Rotary Clubs partnered together to buy a bus for the Boys and Girls Club. Based on the huge success, the Presidents of the St. Augustine Rotary Club, the Coastal Club and the St. Johns clubs partnered with the Sunrise Rotary Club so the impact could be greater.

We were told by District level friends that grants have a better chance of being approved if there is more than one club writing it. So why not 4? Everyone was on board to help. We met and decided each club should nominate 2 organizations for consideration and then bring them before the Quad Club Board for review. The Board was comprised of the current President and President Elect so as to ensure a smooth transition through the next year.

The Quad Club Board narrowed the selections down to 3 and each gave a presentation.  The Wildflower Clinic was deemed the recipient.  Each club donated $5,000 which was matched by a grant form the District.  A check was presented to the Clinic in excess of $31,000 and the facility was named the Rotary Chronic Care Center at the Wildflower Clinic.  Reports are that the Clinic is doing very well.

What started out as a center for Women Making Informed Life Choices morphed into the Wildflower Clinic and now serves those below the poverty line with medical and dental needs.   The Sunrise Rotary Club has had a long term relationship with the clinic and helped raise money to build the main Wildflower building.

In 2017, our club started a service club for elementary age children at Island Prep and has now grown to include a second one at Ketterlinus Elementary.  The philosophy is that community service should start at an early age.  Each year the club grows and one of the highlights for the students is working side by side with high school and college-age students.  They learn about the 4-Way Test and what Service Above Self really means.

The Rotary Club of St. Augustine has had a long-standing service club in St. Augustine High School.  They work independently and jointly on service projects with the club and have grown in numbers over the years to total approximately 150 students.  Their slogan is "Interact through Kindness".  Meetings are held twice per month and topics about Rotary are a staple along with a review of past and future events.

The Rotary Club of St. Augustine (The Club) has a scholarship in place at St. Johns River State College (SJRSC) that has been In existence since 2003 or 2004. It was originally funded with a $20,000 donation from The Club that was matched by the State of Florida.

Scholarship Criteria Considerations
Following are the Scholarship Committee's recommendations for criteria The Club should use to award the scholarships:

This scholarship was established in 2002 by the Rotary Club of St. Augustine as a tribute to Dr. William L. Proctor. Dr. Proctor served as President of the College from 1971 to 2001 and currently serves as Chancellor. He has made and continues to make significant contributions to Rotary, the College, and many organizations in the community and across the state.

To qualify, a student must meet the following requirements: